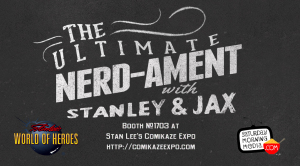 Saturday Morning Media is teaming up with Stan Lee’s World of Heroes to produce a new websieries called The Ultimate Nerd-ament!  The show’s puppet hosts, Stanley & JAX will be at Stan Lee’s Comikaze convention in Los Angeles, October 31-November 2, interviewing convention goers about which of the Top 8 superpowers should advance in a single elimination tournament, or Nerd-ament, to determine the best superpower of all time!

If you will be at the convention, be sure to drop by booth number #1703 and meet Stanley & JAX in person and get interviewed for the show!

For more information, check out the official press release below!

Burbank, CA, October 19, 2014 – Saturday Morning Media has signed a deal with Stan Lee’s World of Heroes to create a new, seven episode, web series that will premiere on the Stan Lee’s World of Heroes YouTube channel. The series, The Ultimate Nerd-ament with Stanley & JAX, will attempt to determine the greatest superhero superpower of all time. It’s March Madness meets superheroes in a battle where the fans determine the winner!

Puppet hosts Stanley and JAX will bring their camera crew to Stan Lee’s Comikaze Convention in Los Angeles on October 31 through November 2, 2014. They will be set up in booth number 1703 and will be conducting interviews with comic book and sci-fi fans of all ages asking them which is the best superpower. The fans’ responses will determine which of the top eight superpowers will advance in a single elimination tournament to determine the best superpower of all time!

“We are really excited to be partnering with Stan Lee’s World of Heroes on this project,” says Saturday Morning Media’s Grant Baciocco. “The coolest part about this show is that the fans who attend Comikazie will be the stars of the series. It’s all about them.” Baciocco adds, “We’ve got a really great team assembled to work on this project. Russ Walko of Puppet Garage, who works regularly in Jim Henson’s Creature Shop will be building the puppets and performing on the show. And the show will be directed by David Marquez who has built a career out of producing and directing live events for nationwide television audiences on MavTV and KDOC in Los Angeles.”

Posted in Shows, The Ultimate Nerdament