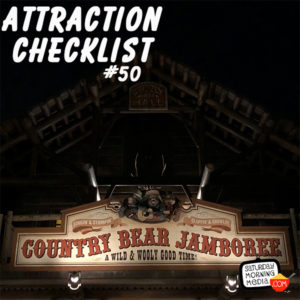 To celebrate the 50th episode of Attraction Checklist, we are going to cover one my all time favorite Disney attractions, Walt Disney World’s Country Bear Jamboree. Located in Magic Kingdom’s Frontierland, The County Bear Jamboree is described in the guide map with this brief sentence: Have a knee-slappin’ time with these singing bears! There are no age or height requirements for this attraction and there is also no Thrill Level listed!

Before we clap our hands and stomp our feet and try to keep right with ‘em, here are five fast facts about Walt Disney World’s Country Bear Jamboree.

1. The Country Bear Jamboree was originally planned for Disney’s Mineral King Ski Resort which was to be built in California and Walt was in on the early discussions of the attraction. In fact, it was one of the final attractions Walt personally helped develop. After Walt’s passing, plans for the ski resort fell through but Imagineers decided the attraction would be a perfect fit for Magic Kingdom in Walt Disney World and the bears had their first performance on Magic Kingdom’s opening day, October 1, 1971.

2. Imagineer Marc Davis led the design of the characters for the show and Imagineer X Atencio and musical director George Burns created and curated the songs the bears would sing in the show.

4. In August of 2012, the show went down for a two month refurbishment and when it reopened on October 17, 2012, the original show had been edited with songs and dialogue removed, cutting the show down about 4 to 5 minutes in length.

5. One of the attraction’s most popular characters is Big Al who sings Blood on the Saddle. Big Al was voiced by Country Music Hall of Fame member Tex Ritter. It is said that Tex Ritter did not tell his children (including actor John Ritter) that he provided the voice for Big Al, instead leaving it as a surprise for the first time they visited the Magic Kingdom and saw Big Al in person.

Okay, gang, here we go. Joining me today is John B. deHaas and after we watch the show we will give you our thoughts on this attraction. This is a binaural recording so if you have headphones put them on now as we head to The Country Bear Jamboree at Walt Disney World’s Magic Kingdom.