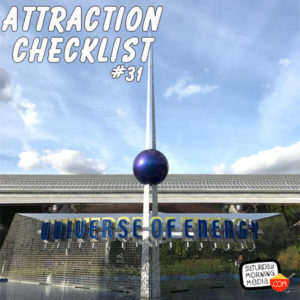 http://www.attractionchecklist.com – In this episode we say goodbye to Ellen, Stupid Judy and Bill Nye the Science Guy as we ride Ellen’s Energy Adventure at Walt Disney World’s EPCOT. We learn a little about the attraction and then take one last ride on the final day of operation! John B. deHaas is along for the ride and after we discuss our thoughts on this attraction. Recorded on August 13, 2017.

This episode we are going to say goodbye to a recently extinct attraction, Ellen’s Energy Adventure at the Universe of Energy Pavilion at EPCOT at Walt Disney World.  EPCOT’s guide map described the attraction in the following way: Take a multimedia romp through time and Ellen DeGeneres’ subconscious at Universe of Energy. There were no age or height requirements for this attraction.

Before we take one last ride, let’s zap through five fast facts about  on Ellen’s Energy Adventure.

1.  Ellen’s Energy Adventure was located in the Universe of Energy Pavilion in EPCOT’S Future World East.  The pavilion opened with the park on October 1, 1982.The original attraction operated until January 21, 1996 when it was closed to make way for the updated attraction, Ellen’s Energy Adventure which opened officially on September 15, 1996.  When the new version of the attraction opened, it included an audio animatronic of Ellen herself that was seen fighting off a dinosaur with a tree branch.  After November 2014, the audio animatronic stopped working and was removed never to be replaced.

2.  When the attraction opened originally it was announced that the pavilion’s roof was covered in 80,000 photovoltaic cells that partially powered the moving theatre seat ride vehicles in the attraction.  These traveling theatre cars followed guide wire in the floor instead of conventional tracks and each of the six ride vehicles could hold up to 80 people.

3.  The ride had a running time of a whopping 45 minutes from start to finish!  Hosts would often repeatedly remind guests that once they boarded the traveling theatre seats, there was no exiting the attraction until it was completed.

4.  The music for Ellen’s Energy Adventure was composed by Emmy Winner Bruce Broghton who has composed music for other EPCOT attractions such as Spaceship Earth, O’ Canada and Soarin’ Around the World.

5.  Ellen’s Energy Adventure had it’s final day of operation on August 13, 2017.  This is when the audio for this episode was recorded.  Luckily it wasn’t recorded on the final ride of the day because the attraction broke down on it’s final ride and guests had walk out of the ride on foot.