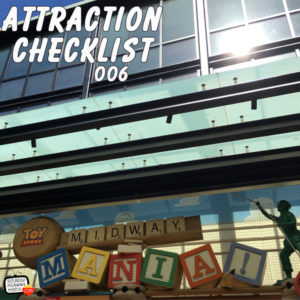 It’s time to throw darts at balloons, break plates with balls, toss rings into space as we head to Disney’s Hollywood Studios at Walt Disney World and take a spin on Toy Story Midway Mania!  Join me for a ride and some discussion bout this insanely popular attraction on this episode!

Located in Pixar Place at Disney Hollywood Studios, The Toy Story Midway Mania attraction is described in the guide map in the following manner:  Ride this midway-style, 4-D shootin’ game starring your favorite Toy Story characters.  There is no height requirement and the only Thrill Level warning is that this is a Spinning attraction.

Before we begin, here are five fast facts about Toy Story Midway Mania:

So get your spring loaded shooters ready, it’s time to experience Toy Story Midway Mania!  Be sure to stick around after  to hear my thoughts on this attraction and I’d love to hear your thoughts too over at the  Attraction Checklist Facebook page at facebook.com/attractionchecklist.  Also, this is a binaural recording, so if you have headphones, It’s time to test our skills on Toy Story Midway Mania!

This show is not affiliated or endorsed by the Walt DIsney Company.  It is for entertaiment purposes only.