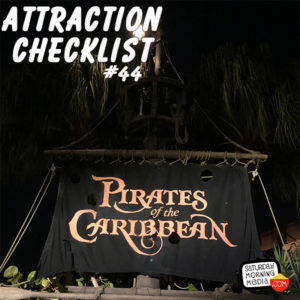 http://www.attractionchecklist.com – Magic Kingdom’s Pirates of the Caribbean at Walt Disney World just reopened after having one of it’s iconic scenes redone.  John B. deHaas and I take a ride on it and give you our thoughts on this newly refreshed ride.  Recorded on March 21, 2018.

Yo ho, yo ho, a pirates life for me.  It is time to head to Walt Disney World and experience the recently updated, Pirates of the Caribbean.  Located in Adventureland in Magic Kingdom, the guide map describes this attraction in the following manner: Embark on a voyage to a time when pirates ruled the sea. The thrill lever describes the ride as being slow, dark and having small drops.  There are no age or height requirements for this attraction and FastPass Plus is available.

Now, before we set sail, here are five fast facts about Pirates of the Caribbean at Walt Disney World’s Magic Kingdom.

2. The attraction features a whopping 126 animatronic figures and 69 of them are pirates.  The flume for the attraction contains around three quarter of a million gallons of water that cycles through at about 18,000gallons per minute.

3.  The attraction’s theme song “Yo Ho (A Pirate’s Life for Me)” was written by George Bruns and X. Atencio.

5.  In March of 2018, the attraction reopened from a refurbishment with even more changes and the ‘Bride Auction’ scene now featured the pirates selling off goods from the village and the iconic Redhead in the scene is now a pirate herself, who helps keep the rowdy pirates in line.  The audio for today’s episode was recorded just a few days after that reopening.