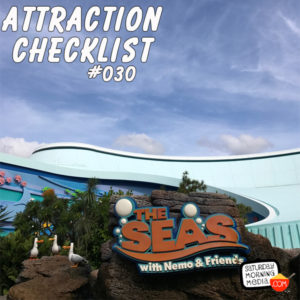 http://www.attractionchecklist.com – This episode we dive into The Seas with Nemo & Friends at EPCOT.  We learn a little about the pavilion and it’s main attraction and then take a ride for ourselves! John B. deHaas is along for the ride and after we discuss our thoughts on this attraction. Recorded on October 27, 2016.

It’s time to put on our diving gear and head back to Future World in EPCOT to experience The Seas With Nemo & Friends.  The Guidemap describe this attraction by saying, “Ride alongside characters from Disney Pixar’s ‘Finding Nemo,’ then surround yourself with thousands of real sea creatures at the Undersea Observation Deck at SeaBase.  There are no age or height requirements for this attraction and FastPass+ is available.  It should be noted that though we will just bee hearing the ride audio in this episode, The Seas with Nemo & Friends is the name of the entire pavilion, including all the aquarium exhibits.

We will touch on this as we explore five fast facts about The Seas with Nemo & Friends!

1. The Pavilion that houses The Seas with Nemo & Friends was originally called The Living Seas and opened on January 15, 1986,  Beginning in December of 2003, the pavilion was slowly re-themed based on the film Finding Nemo.  This changeover was officially completed when the entire pavilion was rededicated on January 24, 2007.

3.  The ride portion of the pavilion, where guests follow along while Marlin and Dory search for Nemo, roughly follows the same track as the pavilion’s previous ride, The Seacabs.  The Seacab track was lengthened by 280 feet for the new Nemo attraction and the Seacabs were replaces by Clammobiles.

4. One of the most impressive ride effects is the finale where it appears as if the characters from Finding Nemo are actually swimming inside the pavilion’s giant aquarium.  This effect is possible thanks to a brand new projection technique that was developed exclusively for this attraction.

5.  The ride ends with the cast singing the song ‘Big Blue World.’  This tune was adapted from the Finding Nemo Musical at Disney’s Animal Kingdom.