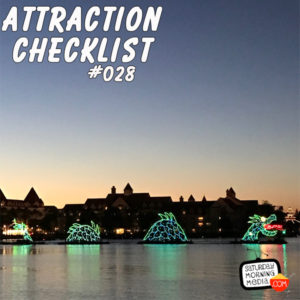 http://www.attractionchecklist.com – It’s time to experience and review one of the oldest shows currently running at Walt Disney World, the Electrical Water Pageant! Recorded on May 26, 2017.

Intro Bumper by Paul of Window to the Magic – http://www.windowtothemagic.com

We’ve got something a little different this episode as we take a look at a classic Walt Disney World attraction that is not inside one of the four parks but on the waters of Bay Lake and the Seven Seas Lagoon!  It is the Electrical Water Pageant!  It’s not listed in any guide maps, but it is described on the Walt Disney World website in the following manner: Great sea creatures and twinkling flags cross the lagoon to electronic tunes in this playful nighttime water parade.

1. The 15 Minute Long Electrical Water Pageant debuted on Monday, October 25, 1971 making it one of the few original opening year shows that is still running at Walt Disney World.

2. The Electrical Water Pageant consists of 14 floats which contain over 50,000 light bulbs to light up the parade’s turtles, whales, octopus and sea serpent!  It is said that crews replace anywhere from 100 to 1500 bulbs a week to keep the floats in tip top shape.

3. Guests today can see the same floats in the same order dating back to 1977

4. The Electrical Water Pageant runs up to six times a night at various locations on the Seven Seas Lagoon and Bay Lake.  Guests can watch from locations including the Polyneasian resort, Fort Wilderness Campground and Disney’s contemporary hotel.