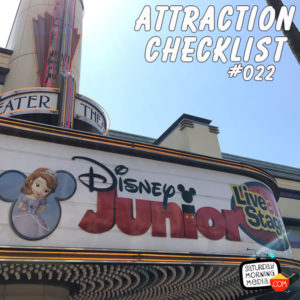 This episode we’ve got something for the younger fans as we check out the recently shuttered Disney Junior – Live on Stage! at Disney California Adventure.  This guide map describes the show by saying, ’Sing and Dance with your favorite Disney Junior Characters!’  There are no age or height requirements for this show and each production lasts roughly 23 minutes.

Before we visit Mickey and his friends, here are five fast facts about Disney Junior – Live on Stage!

2.   The original version of the show that opened in 2003 was the same as the Playhouse Disney Live show that was running at Disney’s Hollywood Studios in Florida.  It featured characters from Bear In The Big Blue House, Rolie Polie Olie, Stanley and The Book of Pooh.

3. Over the years, the show has featured characters from other Playhouse Disney/Disney Junior shows including Jojo’s Circus, Handy Manny and Little Einsteins.  The current iteration of the show that we’ll hear today features Mickey Mouse Clubhouse, Sofia the First, Doc McStuffins and Jake and the Never Land Pirates.

4.  A team of six puppeteers are cast for each show and they manipulate over twenty different puppets of the various characters who interact with the show’s human host and the audience.

5. All the characters in the show are voiced by their original voice actors including Corey Burton doing his incredible version of Hans Conried’s Captain Hook.