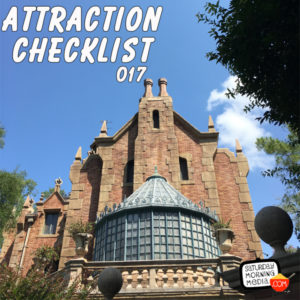 http://www.attractionchecklist.com – This episode we join the 999 happy haunts at Magic Kingdom’s Haunted Mansion in Walt Disney World!  We learn a little about the attraction and then hop a Doom Buggy of our own!  Ride Audio Recorded on October 27, 2016.

This episode we head to Magic Kingdom in Walt Disney World and ride one of the park’s iconic attractions, The Haunted Mansion.

Located in Liberty Square, The Haunted Mansion is described in the guide map in the following manner: Take a spine tingling tour of this dark, haunted estate.  There are no height or age requirements for this attraction and FastPass+ is available.  The thrill level is describes The Haunted Mansion as being a Dark Ride and Slow Ride.

Before we hitch hike a doom buggy to the spirit world, here are five fast facts about The Haunted Mansion at Walt Disney World.

1.  The Haunted Mansion is an opening day attraction at Magic Kingdom in Walt Disney World and marks it’s 45th year of operation in 2016.

2.  While sharing very similar scenes to it’s California counterpart, the Haunted Mansion in Florida has a few extra scenes that required extra narration by the Ghost Host, voiced by the legendary Paul Frees.

3.  In 2007, the attraction received a major refurbishment which added several new elements including the ‘M.C. Esher-esqu’ staircase room, a floating cruystal ball for Madame Leota, and the addition of Constanse Hathaway, the Black Widow Bride in the attic scene.

5.  One of the iconic scenes of the Haunted Mansion is the stretching room sequence.  At Disneyland in California, the floor of the Stretching Room lowers, serving as an elevator to bring guests underground to board the attraction.  At Walt Disney World, where they had more space to build the attraction, an elevator was not needed, so the ceiling rises to create the illusion of the room stretching.

Now, let’s bravely head to the Magic Kingdom’s to meet the 999 ghostly occupants of the Haunted Mansion.  After the ride audio, I’ii share my thoughts on the attraction and I’d love to hear YOUR thoughts on it as well over at the  Attraction Checklist Facebook page at facebook.com/attractionchecklist..  This is a binaural recording, so if you have headphones put them on now because we are about to experience, the Magic Kingdom’s Haunted Mansion.