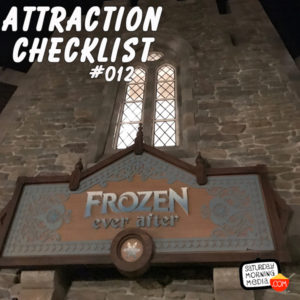 Let’s celebrate winter in the summer as we ride EPCOT’s newest attraction Frozen Ever After.  Will a die-hard Maelstrom fan enjoy this new ride?  Listen and find out!  We welcome your thoughts over at the Attraction Checklist Facebook Page at http://www.facebook.com/attractionchecklist.  Audio recorded on October 25, 2016, front row of the boat.

On today’s episode we visit Elsa in her Ice Palace as we ride Frozen Ever After.

Before we visit Arendelle, here are five fast facts about Frozen Ever After.

Let’s head off for our summer snow day as we ride Frozen Ever After.  At the conclusion of the ride audio I’ll give you my thoughts on the attraction dn I’d love to hear YOUR thoughts over at the Attraction Checklist Facebook Page at facebook.com/attractionchecklist.  This is a binaural recording so if you have headphones put them on now as we experience Frozen Ever After.

This show is not affiliated or endorsed by the Walt Disney Company.  It is for entertainment purposes only.