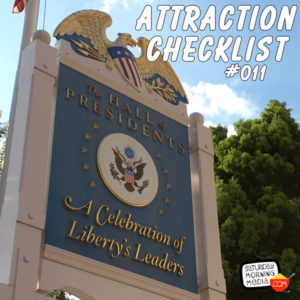 It’s time to choose a new president so what better way to celebrate than by enjoying The Hall or Presidents at Magic Kingdom in Walt Disney World.  We learn a bit of history about this historical attraction and then listen to the full 22 minute presentation.  We welcome your thoughts over at the Attraction Checklist Facebook Page at http://www.facebook.com/attractionchecklist.  Audio recorded on May 25, 2016.

On today’s episode we celebrate the presidents of the past and present by visiting the Hall of Presidents located in Magic Kingdom at Walt Disney World.

Located in Liberty Square, this 22 minute long attraction is described in the guidebooks in the following manner: Behold all the U.S. Presidents on stage together.  There is no height or age requirements for this attraction

Before we get all patriotic, here are five fast facts about Haunted Mansion Holiday.

And now let’s visit The Hall of Presidents.  After the attraction Audio, I’ll give you my thoughts on this attraction and I’d love to hear your thoughts over at the Attraction Checklist Facebook page at facebook.com/attractionchecklist.  This is a binaural recording so if you have headphones, put them on now as we experience, the Magic Kingdom’s Hall of Presidents.