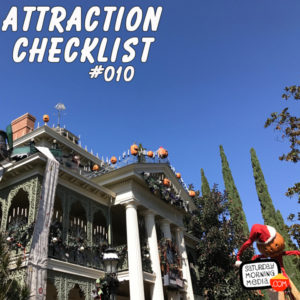 Two holidays collide on this episode as we take a ride on Haunted Mansion Holiday at Disneyland.  Listen through this spooky attraction with us and then listen in as I discuss the attraction with Suzie.  We welcome your thoughts over at the Attraction Checklist Facebook Page at http://www.facebook.com/attractionchecklist.  Ride audio recorded on September 18, 2016.

On today’s episode we experience the collision of two holidays as we ride Haunted Mansion Holiday at Disneyland.

Now it’s time to hop a holiday doom buggy and see what presents Jack has brought us.  Along for the ride is Suzie and we’ll discuss our thoughts on Haunted Mansion Holiday after the ride audio.  The audio has been trimmed a little so as to get on the ride faster after the stretching room.  Once again this attraction audio is a binaural recording so if you have headphones put them on now as we experience Haunted Mansion Holiday.